Oh, what a difference a summer makes...

Last season, the Indiana Hoosiers ACHA D2 team seemed almost snakebit.  After starting off the season with a big 7-6 win over Louisville, the Hoosiers fell apart, dropping 24 games - along with their head coach midway through the season.

In the opposite corner of the state, the newly-minted Trine Thunder could do no wrong.  The Thunder dropped the hammer on nearly every opponent they faced, and rolled off a 29-0-2 record and an automatic berth in the ACHA National Championship tournament.

While it's still early, the proverbial shoe - or skate - seems to be on the other foot. 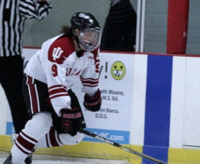 Schurmann-Colicchio's 18 goals has catapulted him to the top of the Hoosiers All-time goals scored list.

Andrew Newman took the reins this past summer, and things appear to have settled down in B-town.  The Hoosiers opened the season by splitting their first two series, then reeled off five wins in six games heading into their showdown with Michigan.  The Hooeys ended up dropping both games to the Wolverines, but bounced back nicely with a weekend sweep of the Dayton Flyers.

Christian Schurmann-Colicchio is off to a raging start, leading the squad in both goals (18) and assists (12).  His meteoric start helped him become the top goal scorer in Hoosier history.  Three others - Matt Herbst, Colan Fitzgerald, and Trent Kunas - are a distant second with 16 points each, but Indiana has eight players averaging a point per game or better.  Joe Stebbins has yet to lose a game in net, while Cam McNamara's five wins, 2.63 GAA, and .927 Sv % all are tops in the battery.  And although Stephen Gasior has a 1-3 record, he still touts a very respectable .921 save percentage.

While the road ahead is long and fraught with danger, the Hooeys have at least started off on the right foot.

Things have not come easy for the Thunder lately, a marked departure from their remarkable inaugural season

While only ankle-deep into their second season, Trine finds itself in very unfamiliar territory.  Having not experienced the first defeat in program history until the National Championship tournament last year, the Thunder find themselves surprisingly right at .500 in the early going.  Granted, two of the teams they faced were M1 clubs (Eastern Michigan, Slippery Rock), but they managed to win three of four against them.

Last year, the Thunder thrived on balanced scoring and stout goaltending, and things look much the same in year two.  Nearly every skater on the roster has recorded at least one point, yet only one ( Christian Wirth-Karbler )has reached double digits.  Life hasn't been as easy for the keepers this go-round, but then again the competition is a cut above last season.  James Fry and Tyler Hough tout identical 3-2 records, while Vinny Evans and Adam Backe have each played a game apiece.

The first rankings of the season are due out tomorrow, and it will be interesting to see how much clout Indiana's nine wins garners them.  The Thunder need not worry about rankings at this point -- pick up a few wins against the tough teams that lay ahead, and the rankings will take care of themselves.

If you and your sweetie are both hockey-lovers, this season's Valentine's Day weekend will be even more special.  Angola is a quaint little town, a quiet and scenic place for a romantic getaway.  Yet unlike you two, there will be no love on the ice when the Hoosiers visit the Thunder Ice Arena (aka "Thunderdome") to determine supremacy in our fair state.