It seems like every team in every sport is holding a Military Appreciation Night/Day/Game.   Athletes ditch their usual uniforms for the Men & Women In Uniform.

... and for good reason.  This country (and many others, for that matter) owe a debt of gratitude to those who serve and have served in our Armed Forces that we will never come close to repaying.

Indiana's two ECHL teams - the Fort Wayne Komets and the Indy Fuel - both have nights set aside to recognize those who serve. 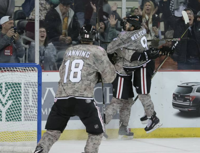 The Indy Fuel went first, sporting the camouflage sweater and socks that has become the staple of Military Appreciation games everywhere.  They might not be unique, but they're still extremely cool.  Making the night even more memorable for the home crowd was the last minute comeback and 4-3 overtime victory over the visiting Toledo Walleye.

Tied 2-2 heading into the final minute of the game, the Walleye scored on the power play what many thought would be the game winner.  The Fuel refused to surrender, as Brett Welychka would knot the game at 3-3 with 37 seconds to play.  Foward Quentin Shore would then take a pass from blueliner Neil Manning and, with just twelve seconds left on the clock, rip it past the Toledo netminder for the win.

The Komets are taking the whole weekend for their Military Appreciation event, wearing the special jerseys for two games before auctioning them off in support of Honor Flight Northeast Indiana.

Keeping with the local flavor, the Blacksnakes - as the Komets will be known as for the weekend slate - pays tribute to the Air National Guards' 122nd Fighter Division, which is based out of nearby Heritage Park.

The 122nd Fighter Wing serves in the Air Expeditionary Forces deployment rotation, as well as deploying members to augment Air Force and Army units serving at home and abroad.  The 122nd Fighter Wing has contributed multiple combat medical teams, security forces squads, vehicle drivers and pilots who are hand-picked for their outstanding combat flying skills and many individuals who are asked to serve on specialty teams in the Middle East.  Combat Zone assignments include Afghanistan, Iraq, Oman, Kyrgyzstan, Uzbekistan, Qatar, Diego Garcia and many more areas.

Honor Flight Northeast Indiana supports veterans by providing an opportunity to visit Washington, D.C. and its many memorials to thank our them for their service and pay tribute to those who gave their life for our freedom.

Friday's game versus the Indy Fuel will start at 8pm, and Saturday's tilt will pit the Blacksnakes against the Kalamazoo Wings.  Puck drops at 7:30pm.