Spelling success with a capital 'U'

From Club Hockey To Shaping the Next Generation

There are two drastic misconceptions out there regarding hockey in Indiana:  that ‘club’ hockey is often a dead end for a player’s - or coach’s - career, and that the Hoosier State has little to offer the hockey world.  And while our fair state is still a small player in the greater hockey landscape, these former IU Hoosier prove that both of the above statements are far from the truth.

For many aspiring young players with NHL dreams, playing junior hockey in the USHL is the next step to landing a spot on a collegiate roster.  Yet for these Hoosiers, it means going back to the “U” to help mold those youngsters into legitimate collegiate prospects.

Brad Lutsch is one of those guys.  A member of IU’s D3 club from 1995-99, Lutsch still holds the teams’ career marks for points (286), goals (101), and assists (185).  Yet for all his success on the ice, Lutsch has made an even bigger impact from behind the bench.  A few years after leaving Bloomington, he found himself about an hour’s drive north as the Associate Coach and Director of Player Personnel of the Indiana Ice.  During his time with the Ice, the team’s record was 145-77-18, making the playoffs all four years and winning the Clark Cup Championship in 2008-09.

Lutsch’s second stint in the USHL has gone equally as well.  In May 2014, he joined the Fargo Force as an Assistant Coach and Director of Player Personnel.  Four years later, Lutsch hoisted the Clark Cup again for the second time in his career, as the Force won their first championship in organization history.

Former IU forward Matt Grainda isn’t in a position to win any championships, but his work is essential for the teams that do (and don’t).  Grainda has spent the past three seasons with the USHL Central Scouting department.  Aside from scouting players for the league, Grainda helps organize the USHL Combines in advance of the Phase I and Phase II drafts.  This past May, over 400 players were selected in the drafts, and Grainda’s insight helped shape those decisions.

“I became directly involved with the league through working with a few independent scouting agencies for a few seasons,” Grainda explained.  “My work caught the attention of Doug Christiansen (USHL Director of Player Development), who offered me a position with Central Scouting.  As a Regional Amateur Scout, I cover the state of Michigan, the MidAm region (Indiana, Kentucky, Ohio, West Virginia, and Western Pennsylvania) and all of Ontario.  My job is to evaluate the youth hockey talent in the region in preparation for invites to our USHL Combines. 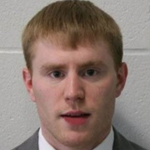 Another former Hoosier hoping to aid the next generation, Weiss joined the Waterloo Black Hawks scouting department during the 2017 season.  While he wasn’t involved with building the 'Hawks Anderson Cup-winning roster, his work with Waterloo GM P.K. O’Handley on the 2018 draft will help shape the roster for the foreseeable future.

“I started scouting my freshman year at Indiana in 2010,” said Weiss.  “I had been working for a third party NHL Draft scouting service since 2011 but shifted gears towards youth scouting the last 3 or 4 years. I would provide second opinions on players if teams asked for them, but really wanted to find a team that was the right fit for me.  Waterloo had a scouting job open back in August and fortunately there was mutual interest.”

Having been involved in scouting for the past several years, Weiss was well aware of the volume of work involved before a player ever gets drafted.  “My role this year was to get viewings on birth year players from 1998-2003 in preparation for the USHL drafts, compile draft rankings tailored to the philosophy of the coaching staff, and conduct pre-draft interviews with eligible players. I also help put together our main camp as there are always players that don't get selected in either draft that can help a the team.”

But it isn’t just former Hoosier players making an impact in the USHL.  An assistant coach for Indiana’s D2 team from 2015-17, Jon Sherman was added to the Waterloo Black Hawks staff as hockey operations assistant this past season, contributing to the organization’s video analysis, statistics tracking, and player development efforts.  Following an 8-5 regulation loss to the Lincoln Stars, Waterloo ran off a 16-game point streak to end the season as Anderson Cup (Regular Season) Champions.  Ironically, it would be Lutsch’s Force that would bump Sherman’s Black Hawks from the playoffs in the semifinal round on their way to the Clark Cup title.

As part of our mission to grow and promote the game of hockey in Indiana, we at INHockey.net have spent a considerable amount of time and effort in exposing the vast number of opportunities available to young players to continue their hockey careers.  While no player ever wants to hang up the skates, these guys know that true passion for the game extends well beyond the dasher boards.

“Something that often gets overlooked is the passion that (club) players and coaches have for the game,” Weiss states.  The fact that these are club teams doesn’t mean there aren’t opportunities for anyone willing to make the commitment.  “From the four of us who work in the USHL, to Alex Kyrias (played goalie for IU from 1992-97) who works in the NAHL as a Director, to Jory Zola who works as an advisor for junior hockey players, and Cody Reiff (2012-16 IU DIII hockey player) who worked in the Florida Panthers analytics department, our guys have all worked hard to be involved in the game at the highest levels.”

Hockey dreams can take many different forms.  For those who truly love the game, a host of opportunities are out there - regardless of what level you come from.