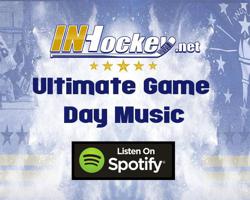 Have no fear, Hoosier Hockey Faithful.  I know you're still shaking off that turkey-induced coma and suffering the PTSD from extended exposure to relatives.  What you need is some good 'ol hockey elixir to get you back on track.  Lucky for you it's Wednesday which means Dr. INHockey.net is in the house to administer a dose of Game of the Week! followed by a dose of Indiana state team rankings which are published tomorrow.  So sit back, relax, and let the hockey goodness flow through your veins.

In our last edition Game of the Week!, I highlighted Crown Point and Munster in a cross-town rivalry game.  With the Mustangs nipping at the heels of the Bulldogs in the INHockey.net high school rankings, it was a statement game for both teams.  I expected it to be a penalty filled match up just based on the Crown Point/Munster rivalry which led me to assert the importance of the power play.  But the game actually ended up being fairly clean until late in the third period (a couple of game misconducts), with only thirty total penalty minutes between the two teams .  Still, Crown Point had the only three power play opportunities of the game and guess what?  You got it - they went 0-3 and lost the game by two goals.  Looking back, how important were the power plays?   As I said, when good teams come to play and they gift you with power plays, you have to make them pay.

But as I predicted, the Mustangs offense was too much for Crown Point and Munster's Triple Threat , Bocock, Sarzynski, and Dottto combined for five points, leading their team to a 4-2 win.

Like a phoenix rising from the ashes, I'm back on top for the week, bringing my overall record to 3 - 4.  Now let's see if I can climb to .500 with this week's edition of Game of the Week! 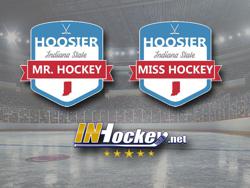 On Saturday, the Carmel Icehounds Blue Team (JV) travels down to the southwest corner of the state to meet up with the Evansville Thunder at Swonder ice arena, in a Hoosier League-Commissioner's Division match up.  This isn't necessarily an unusual match up but due to numbers, Evansville only has a single team this year where in years past, they would have had an A (varsity) and a B (JV) team.  So while this is technically their varsity team, they chose to play in the Commissioner's Division (traditionally a division for JV or small teams)  in order to give their younger/smaller team a chance to compete.  It's a great decision and I applaud the ISHSHA and Hoosier League for being flexible for the sake of the kids.  That being said, this should be a very competitive game as both teams are sitting at the top of the Commissioner's Division with a clear line separating them from the other teams in the group.

Let's take a look at the teams: 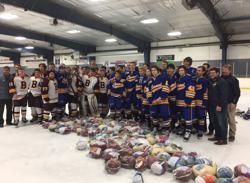 Carmel Blue vs. Brebeuf for the "Turkey Bowl" - 103 turkeys donated to Wheeler Mission.

The Icehounds Blue Team has been cutting it's teeth primarily in the Illinois Scholastic League up until mid November.  Wins in Illinois have been tough to come by for the Icehounds as they've gone 2-13 against those teams.  Now, we don't reflect those games in the rankings and here's why, the Icehounds have gone 6-3-1  in  ISHSHA play and those three losses are against varsity teams.  So despite their overall record, the Blue Icehounds are a good team especially when competing against Hoosier teams.  Led by forward  Jarod Cheslock (22 pts), the Blue Icehounds are  7-0 in the last seven games.   Most of those games are against  the other Commissioner League teams with the exception of Owensboro JV (which isn't really a JV team thanks to the withdrawal of Total Package Hockey from Evansville).

Swonderr Ice Arena is one of the best venues in Indiana.

Evansville has gone 6-0 in their last six games, with strong showings against Brebeuf  and Lake Central White.  Dom Sachetti and Aaron Massie lead the team with 16 and 14 points respectively, but the Thunder tend to spread the offense with six players in double digit points for the year.  That's a good thing considering Carmel Blue's goal tending is  struggling to break the .900 save percentage mark.   Unfortunately, the Thunder are 3-37 on the power play this year which means  scoring opportunities will have to come  on 5 v 5 play unless Coach Vaal has come up with a solution to the power play woes.   Nonetheless, the Thunder have proven to be a legitimate  contender in the Commissioner Division.

This series might turn into a grudge match considering the teams play twice this weekend and are sure to meet up in either the 1A or 2A state tournament in the spring.  That being the case, I expect a physical affair with both teams trying to assert their dominance in the  games this weekend.  This is probably one of the most equal match ups we'll see this year and both games should be worthy of the casual fan's attention.  If  I could stop there, hi-five everyone and do a George Castanza-ish “leave on a high note,” that would be great but I know you all want  some resolution.  So who wins this match up?

Well, no doubt we have to consider that Carmel Blue has had a great opportunity to sharpen their skills with a significantly better Illinois schedule.  But we also have to consider that Evansville is a combination of last year's varsity and JV teams.  Taking it all into consideration and weighing the obvious, I'm inclined to side with the boys from the south - Evansville.  This is only because they have a slightly older team and what is it that Da Vinci said?  "Wisdom winning is the daughter of experience."

There you have it, Hoosier Hockey Faithful.  Evansville is my team this week (at least for the first game).  You heard it here first!

INHockey.net Readers are also Checking Out These Articles: