Artist's rendition of Jeremy as he writes this week's edition of Game of the Week.

As I'm sitting down to write this edition of Game of the Week, I gotta tell ya, I feel like Ricky Bobby in Talladega Nights....I'm not sure what to do with my hands.  I'm still a little shell-shocked from just how far off I was on last week's prediction.  Let's recap and try to make some sense of what happened at ground zero.

Early last week, based on a little roster and stat sheet study, I called for the South Stars to beat the Zionsville Eagles, 5 to 4.  The basis for that decision was how many kids the Eagles turned over on their roster - nine skaters and lots of offensive firepower, whereas the Stars roster was mainly still intact.  As we've seen time and again, teams with major roster changes usually have some speed bumps at the beginning of the year and this game looked like a speed bump for the Eagles.  Boy, was I wrong.

The Eagles jumped out to a 5-0  lead in the first period and never looked back.  They went on to beat the Stars, 11-3 in what ended up being a plain-old barnyard whoopin'.  Forward Robbie Donovan led Zionsville with 6 points in the game.  He'll be one to watch as the season goes on and could work himself into the Mr. Hockey conversation.  As for the Stars, there weren't many bright spots in a week I'm sure they'd like to forget.  Prior to this game, they lost senior Kyler Thomas (an Indiana State Mr. Hockey candidate) with a  separated shoulder, sophomore Malachy Davis is out until the first of the year with a broken wrist, and they lost their ice last week due to facility issues at their home rink.  Yikes...there has to be a season reset button around here somewhere.  Well, at least it's only October.

And just like that, Hoosier Hockey Faithful, I am now 1-1 on the season.  But now I get to redeem myself with this week's edition of Game of the Week!

Follow me up to "da Region," where the Midwest Training Facility sits nestled right along the Indiana/Illinois border in Dyer, Indiana.  It's a rink the Crown Point Bulldogs call home and they'll play host to the Leo Lions this Saturday at 4:00 pm.

These two teams are relatively unknown to each other.  They played once last year and they have a single game on the schedule this year.  It's not a rivalry, there's really not much recent history, and that's what makes it compelling.  The two teams will be distilled down to skills, talent, and coaching without much baggage.  On that alone, I would expect this game will be a close one.  Let's take a look at the rosters and see if we can dig deeper. 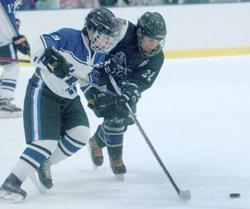 Connor Bonecutter's 55 points will be missed this season. Photo courtesy of the JG Gazette.

Much like they did last year, the Lions have cut their teeth on their Fort Wayne league-mates so far this season.  Leo has made short work  of Homestead, Summit City, and the Bruins by a combined score of 11-2.  They dropped a close one to Dwenger (3-4) and will play Carroll tomorrow night (Wednesday).  Forward Carter Bonecutter had an absolute field day against HSE B and racked up 9 points.  He currently leads the Lions with 18 points on the season.  Defenseman and Team Indiana rostered Ryan Freeby has 5 points on the season (1 goal, 4 assists)  and leads a defensive unit that is giving up only 1.4 goals per game.  However, the Lions lost 10 players from last year's roster including Connor Bonecutter and Nick Decker who combined for 120 points last season.  As we saw from last week's game, that doesn't mean a whole lot provided there are playmakers up to the task.  That being said, Lucas Robins, Ben Speckhard, and Tyler Grossman have made their presence felt on the score sheet so far this season, all with 4 or more points.  If that production keeps up, Leo should have a solid season.

Joe Shaughnessy leads the Bulldogs and is on the 2017-18 Mr. Hockey watchlist.

The Bulldogs have already had some ups and downs so far this season.  A solid win against Lakeshore/St. Joe  was undercut by a rather lackluster tie against the Riley Wildcats.  They rebounded to beat Carmel Blue 3-0 and Adams 3-2 on the following weekend, and dropped their last game 4-2 as Lakeshore got it's revenge.  The good news for Crown Point is they get one more season out of senior and Team Indiana rostered Joe Shaughnessy, who had 35 points last year and was nominated to the Indiana State Mr. Hockey watch list this year.  Outside of that, the Bulldogs only lose six from last year's team, two of which were goaltenders and out of the four skaters lost, only Sam Grzych had any significant impact with 33 points last year.

Well, if last week's results taught me anything, it's that the mathematical wizardry associated with pouring over stats and rosters isn't always going to give an accurate picture.  That's what I love about high school hockey.  The non-tangibles are as significant, and sometimes even more so, than what's on paper.  Still, one thing that really sticks out to me is that Crown Point has relied on Shaughnessy to drive the offense early this season.  Leo, on the other hand has spread their offense around with the exception of Bonecutter's offensive explosion against HSE B.  My gut is telling me that Leo will be a little too much to handle for the Bulldogs this weekend.

I like the Lions defense against the fairly one dimensional Bulldogs offense (so far).  Additionally, the Lions balanced offense will have a chance to tee-up on the Bulldogs inexperienced goaltending (remember the Bulldogs lost two goaltenders from last year).   I'm calling for the Leo Lions to "roar" in da Region, 4-3.

There you have it, Hoosier Hockey Faithful, the Leo Lions are my team this week.  You heard it here first!

Game side note:  Watch the match up between Team Indiana teammates, forward Joe Shaughnessy and defensman Ryan Freeby.  This should be a showcase for what high school hockey has to offer.

INHockey.net Readers are also checking out these articles: